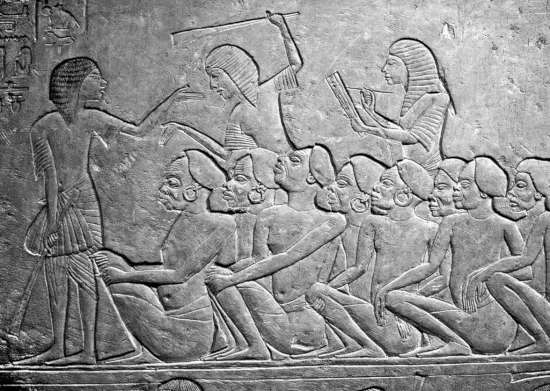 Slavery has existed as long as humans have existed. The Christian Bible has many references to slavery. The image above is of an Egyptian slave market that existed thousands of years ago.

Every race has at some time been enslaved. The Roman Empire was an equal opportunity enslaver, enslaving some members of just about every race they encountered.

The history of Islam is a history of mass enslavement. Professor Robert Davis of Ohio State University estimates that over a million Europeans were enslaved by Muslim slave traders from Morocco in North Africa alone, mostly women and children. “The Slave Market,” a painting by Jean-Léon Gérôme, depicts this.

The Muslim demand for, in the words of one historian, “white-complexioned blondes, with straight hair and blue eyes,” traces back to the prophet of Islam, Muhammad, who enticed his followers to wage jihad against neighboring Byzantium by citing its blonde (“yellow”) women awaiting them as potential concubines.

For over a millennium afterwards, Islamic caliphates, emirates, and sultanates—of the Arab, Berber, Turkic, and Tatar variety—also coaxed their men to jihad on Europe by citing (and later sexually enslaving) its women. Accordingly, because the “Umayyads particularly valued blond or red-haired Franc or Galician women as sexual slaves,”

Slavery has been endemic to Africa through all of recorded history.

If as most anthropologists believe the human race emerged out of Africa, then it is certain that the first slave, and first slaveowner were Africans. Slavery has been endemic to Africa through all of recorded history and can still be found there even today.

The above diagram is from My Nigerian great-grandfather sold slaves on the BBC site. Quoting from that article:

My great-grandfather, Nwaubani Ogogo Oriaku, was what I prefer to call a businessman, from the Igbo ethnic group of south-eastern Nigeria. He dealt in a number of goods, including tobacco and palm produce. He also sold human beings.

“He had agents who captured slaves from different places and brought them to him,” my father told me.

Nwaubani Ogogo’s slaves were sold through the ports of Calabar and Bonny in the south of what is today known as Nigeria.

People from ethnic groups along the coast, such as the Efik and Ijaw, usually acted as stevedores for the white merchants and as middlemen for Igbo traders like my great-grandfather.

There were free blacks before the Civil War that owned slaves.

Once Africans arrived in North America and were sold some of them, or their descendants, ended up being the property of free blacks. A prominent example was William Ellison Jr.

William Ellison Jr., born April Ellison (c. April 1790 – December 5, 1861), was a U.S. cotton gin maker and blacksmith in South Carolina, and former African American slave who achieved considerable success in business before the American Civil War. He eventually became a major planter and one of the medium property owners, and one of the wealthiest property owners in the state. According to the 1860 census (in which his surname was listed as “Ellerson”), he owned 63 black slaves, making him the largest of the 171 black slaveholders in South Carolina. He held 40 slaves at his death and more than 1,000 acres (400 ha) of land.

Antoine Dubuclet was another wealthy black slave owner in the South.

At the time of his death in 1887, Antoine Dubuclet was a wealthy man. A very wealthy man. In fact, he was widely regarded as one of the richest men in all of the South, richer even than his white neighbors. According to historians’ estimates, he was worth around $265,000, around 200 times the average annual income. As well as his land, he also owned significant numbers of slaves. Moreover, he was well-respected in society, not just because of his riches. Dubluclet was, in many ways, a true Southern gentleman: smart, well-dressed and debonair.

Miles places the number of enslaved people held by Cherokees at around 600 at the start of the 19th century and around 1,500 at the time of westward removal in 1838-9. (Creeks, Choctaws, and Chickasaws, she said, held around 3,500 slaves, across the three nations, as the 19th century began.)

During the Civil War, the “Five Civilized Tribes” fought on both the Union and Confederate sides. After the war, the Treaties of 1866 freed the slaves. Even after that, blacks still faced discrimination in the Indian territories, with many tribes passing laws similar to the infamous “Black Codes” in the South.

The Native Americans Who Owned Slaves

“If the history of slavery ought to teach us anything, it is that human beings cannot be trusted with unbridled power over other human beings – no matter what color or creed.”

History is messy, and unfortunately history is often not being taught accurately. Thomas Sowell, a senior fellow at the Hoover Institution writes:

If the history of slavery ought to teach us anything, it is that human beings cannot be trusted with unbridled power over other human beings – no matter what color or creed any of them are. The history of ancient despotism and modern totalitarianism practically shouts that same message from the blood-stained pages of history.
…
But that is not the message that is being taught in our schools and colleges, or dramatized on television and in the movies. The message pounded home again and again is that white people enslaved black people.
…
It is not just the history of slavery that gets distorted beyond recognition by the selective filtering of facts. Those who go back to mine history, in order to find everything they can to undermine American society or Western civilization, have very little interest in the Bataan death march, the atrocities of the Ottoman Empire or similar atrocities in other times and places.

Those who mine history for sins are not searching for truth but for opportunities to denigrate their own society, or for grievances that can be cashed in today, at the expense of people who were not even born when the sins of the past were committed.

An ancient adage says: “Sufficient for the day is the evil thereof.” But apparently that is not sufficient for many among our educators, the intelligentsia or the media. They are busy poisoning the present by the way they present the past.

If one thing is true of America today, it is that one political orientation has spent a great deal of time “poisoning the well” of race relations in America. There is hardly any country or civilization that has not had some dark corners in its history, and many of them far darker than those you can find in American history.

America has been the greatest champion of human freedom the world has never known.

Let me close with this quote:

This has always been the fatal flaw of the Left’s politics of race guilt: Name the race that’s not “guilty”? Racism, violence, and conquest are part of the human condition, not the European one.

There is, however, one key difference between the European Conquistadors and the Incas, Aztecs, and Iroquois who conquered the Americas before them: In addition to violence and greed, the Europeans also brought literacy, liberalism, and the scientific method, all of which would transform America into the greatest champion of human freedom the world has never known.

Why ‘Indigenous Peoples’ Day’ Is Far Worse Than Columbus Day

Did Black People Own Slaves?
Ending the Slavery Blame-Game
Free Negro Owners of Slaves in the United States in 1830
Top 10 Black Slaveowners
Native American slave ownership
How Native American Slaveholders Complicate the Trail of Tears Narrative
Slavery among Native Americans in the United States
Islam And Slavery
Islamic views on slavery
The Role of Islam in Slavery in Africa
Exposed: Islam’s Role in the Transatlantic Slave Trade
Slavery Prevalent in Africa 400 Years After Transatlantic Trade Began
E Pluribus Unum – One From Many
White Supremacy, No
Racism & The Hard Wired Brain

I must study politics and war that my sons may have liberty to study mathematics and philosophy.  John Adams